Zentangle – a surprise that unfolds one stroke at a time 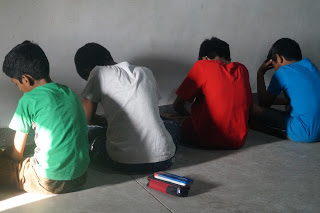 Entangle=cause to become part of a tangled mass
Zentangle=creating mass of beautiful images from repetitive patterns.

We got entangled in zentangles beautifully with the Grade 6 and Grade 7 at HLC, Chennai. The children explored their own capacity for a mindful activity without an overt awareness of how they were executing it. 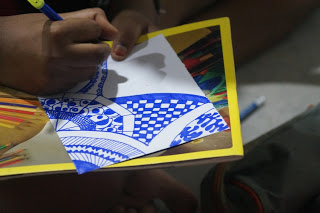 Being with themselves, totally engrossed in their expression of the art form, the music wafting gently around them enhancing their experience in a subtle manner, the children seemed to be impervious to time. It almost seemed a travesty to disengage some of them from the activity at the end of the class.

A robust group they came in chattering, friendly, curious, and eager for their ‘7i’ session. There was much laughter and banter during the introductory round. The energy was high yet not intimidating. Yet introducing them to the zentangle activity seemed an antithesis of this energy. It was fascinating how quickly they adapted to it and how completely they adopted it. Each one brought out his/her own creativity to the fore. Once it was established that sharing is an option, it shed the last vestiges of any doubt that ‘non artistic’ children had. The intent was never the art anyway, their reflection of the process brought out the words that conveyed its intent; calm, peaceful, confused, blank, clear, uncomfortable, happy, ease.  It was almost as if they were surprised at their own reactions. It was interesting that not many sought reassurances as to the accuracy or the ‘rightness’ of their work. Also how they responded to simple verbal requests and non verbal instructions to respect the process and each other by maintaining the ambience of silence that was essential.
The zentangles were followed by wishes and dreams, another exercise that made them delve a little deeper into their own desires, aspirations, and expectations. They had to express what they dream for themselves and also give their opinion on whether dreams come true, what impedes their lack of fruition and what facilitates it. Though their responses ranged from idealistic conditioning to realms of black and white thought processes, what was interesting was that they placed the onus of dreams coming true on themselves rather than on the forces around them like expectations of parents, teachers, the social acceptability etc. Of course the dreams that they wrote for themselves came from fantasy, areas of interest or the safe zone of socially acceptable ‘professions’. They were yet to give full reign to their imagination for something fantastic yet possible or something unconventional. They were however able to distinguish between ‘practical’, ’possible’, ‘improbable’ desires. 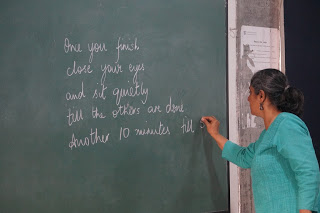 It was fascinating to see the emerging maturity vying for a place with childlike naivety.