If you never did, you should! 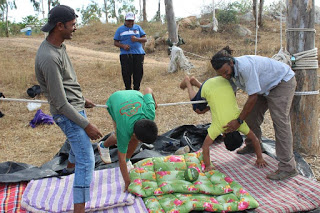 ….and will you succeed?
Yes you will indeed!
(98 and ¾ percent guaranteed)
Dr. Seuss

Dr. Seuss got it right……well almost! The children at Tukio covered the last 1and ¼th percent! When asked to step out into the unfamiliar and the unknown, most adults will think twice and at least half of them would rather not attempt it at all. Here is where we can learn from children. While some might see it as having no risk filters, no thoughts of consequences, I think it is more than that. It is the simple belief in oneself, it is the non-existence of self-imposed boundaries and limitations, it is the true act of living in the moment.

Nowhere was this more evident than at Tukio this week. Presented with new levels of challenges this weekend, they more than just rose to the occasion! Every one of them conquered whatever was holding them back and jumped on the ropes, pushing themselves. Each of them had their own little bridge to cross when it came to the rope course challenge set out for them. Whether it was an Abhinav who while he took initiative in participating, took his time with climbing the ladder or a Keshav who found it difficult to get off the rope course. While the course looked like it would be a breeze for Naman, there was fear evident in him, which he overcame and did everything on offer. Nihal achieved a new milestone in participation of activities without any cajoling and also overcame his fear of getting down from the ropes. To Kabir, the whole process was effortless and he willingly participated in it all. Sai Sharan while was not too willing to participate in the activities itself, demonstrated clarity of thought and understanding of what he would do.

While on the one hand, there was an overcoming of fears, on the other hand watching each of them bringing in their own uniqueness to the whole process was a joyful experience. Each of them patiently waited their turn, which itself was a big achievement, with an accompanying interlude of singing by Abhinav, followed by Kabir every time. Nihal’s concern for Dambaru and the bond he shares with him was evident in his voluntarily reaching out to support Dambaru every time he was on the ropes. Naman shows beautiful leadership qualities, with an effortless leading of any child who is buddied with him. Sai Sharan’s staying on at the venue rather than going back to the farm house and his keen observation of the activities is in itself a movement for him. It was fascinating to watch Keshav’s independence and complete focus on the activities on hand. All of them actually responded best to the new outdoor instructors and the session proceeded smoothly when the multiple instructions from the familiar people stopped and the kids were allowed to build their own relationships with the new people.
There are so many little lessons in all of this for us adults. An overall humbling experience, with a clear message to us…….
Think left and think right and think low and think high. Oh, the thinks you can think up if only you try! Dr. Seuss