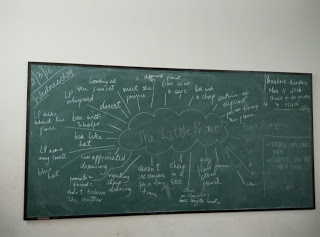 Devika is a highly confused 20 year old, who likes to spend her time working with children, exploring craft techniques and drinking coffee. She has finished her schooling at Centre for Learning, and is currently on a gap year.

I am currently in Chennai, co-facilitating the 7i initiative at HLC . This is a part of an ongoing series of sessions conducted by Snehadhara Foundation (http://snehadharafoundation.org/) under their initiative ‘Impart’. The aim is to interact with 6th, 7thand 8th standard students, and explore ‘social domain goals’. It’s a long term project that uses arts as a medium to see their own processes of motivation, sharing, and understanding diversity amongst other things. 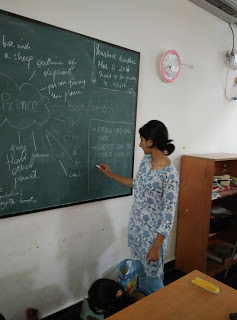 I was a part of the facilitation of 6thstandard students yesterday. This was the closing session for the year for this group.We started by sitting in a circle, and discussed the annual day the students had participated in recently. It was nice to hear the multiple perspectives. This was followed by an introduction game. I tried to keep it as simple and hassle free as possible. I came with an easy ‘tap-tap-clap’ beat that everyone had to follow. They all managed to follow the beat quite effortlessly. The next step was to speak out our names to the beat. This was a little tricky but fun at the same time. The only thing I had not accounted for was the loudness of the beat that could overpower the voice.

Then we spoke to the children about ‘The Little Prince’, a book they had read in their initial sessions and were supposed to complete on their own. Unfortunately, most of them had not read the book and we were required to rethink the activity. We had initially planned to create a timeline on the board with the help of the students. They were then supposed to pick one planet mentioned in the book to create a postcard describing it.

We asked the children to recall anything they remembered from the book. This started as a verbal exercise and eventually we created a ‘web diagram’ on the board. This was extremely helpful is showing the children that they had made more observations than they realize. I was personally surprised to see the minute details they remembered like the colour of boy’s coat. 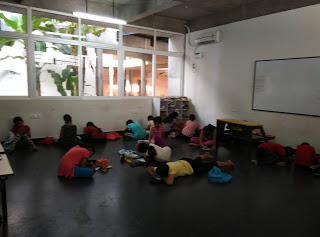 After creating a small link with the story, we decided to introduce the postcard activity. Since the familiarity with the text was still limited, the children were now asked to create their own planet. They were supposed to write a postcard to a friend, which included both a drawing and a description of this unique imaginary planet. The objective was to encourage them to think about their own areas of interest and how they can manifest in a different world. With slow instrumental music in the background we set off on this journey of creation and exploration.
The students took their time to create interesting planets. They had some clarifications and questions that they voiced quite openly. The only think we forgot to account for was the time management for those who finish their work quicker. It didn’t get too chaotic, since they managed to occupy themselves by revisiting their work or playing cards in a small group.
Post the short 20 minute break they were supposed to share their postcards with the class. Some of them were a bit hesitant about the sharing. We created a simple format they all had to follow. They were supposed to display the picture to the group, and mention one thing about that planet. This went extremely well. People came up with some very unique ideas such as:
and many many more… 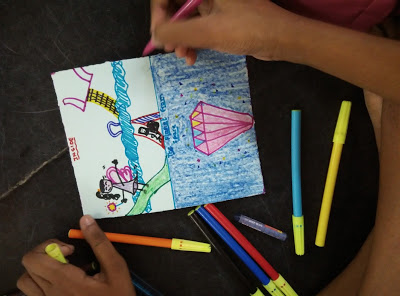 The last part of the session included a closure game called ‘dragon tail’. This was a competitive game which required the formation of two groups. The groups were made to stand in two straight lines. It was interesting to see and bring to focus, the clear gender divisions. They were required to hold each other by the shoulder and create a ‘train’ of a sort. This took a little time and negotiation regarding who stands where, but eventually they were able to follow the instructions. We gave a cloth to the two students standing at the end of their lines. They were supposed to tuck this into their pants, so that it resembled a tail. The first person in each line was declared the head, and the heads of both the lines faced the tail of the other line. The game required the both the teams to stay in contact with their line, while protecting their own tail and helping their head catch the other tail.
It was a very chaotic and energizing activity. They were all supposed to avoid speaking, which became exceedingly difficult to follow. The pushed and crushed each other in the process and still managed to have fun. After a few more people got a chance to be the head or the tail, we asked to strategize with their teams. This complicated the matter a bit. The first attempt helped one team achieve their goal quite easily. The second attempt lead to both the teams using the same strategy. This made the situation quite comical and increased their excitement. We gave everyone a chance and then settled down in a circle again.
We sat together and reflected on the activity and how it made everyone feel. Some very significant observations were made. Some people felt physically hurt and exhausted while others noticed the competitiveness growing. One student felt that the strategizing made the game more ‘winning focused’. A boy noticed that the situation started resembling the violent scenario he had created for his imaginary planet. I was impressed by their ability to articulate their feeling so well.
Finally, we spoke about this session and the programme as a whole. We received some very valuable feedback from the children. It was interesting to see them express the fact that some of them were still unaware of the ‘seven Is’ that this project hoped to inculcate. Some of them claimed that the sessions helped them redefine learning in a non-academic format, and helped them coordinate with each other. There was a general appreciation for activity based learning. There was a reluctance to stay on after school hours, which was quite explicitly conveyed by some of the children.
It was a very interesting one-time session for me. I enjoyed the process and the sharing. I felt that a long-term association and relationship with the children will surely make it meaningful for both the parties.