The Reverberation of the rhythm and the rumble 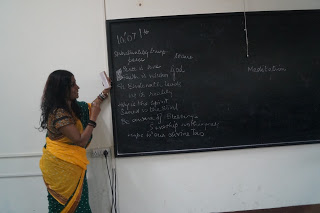 Rennee writes about her experience co-facilitating a session with the UG students at IIPR. The session is a part of the certificate course titled ‘ Psycho-Socio Wellbeing using Arts and Play’ offered jointly by Snehadhara and Headstreams.

Fifteen enthusiastic students along with the facilitators were on a rhythmic journey during the session to create a rhythmic revolution of sorts. One student proposed ‘Spirituality’  as the topic for the song composition.There was instant acceptance by the group and they began to spell out their ideas, beliefs and notions . The board held all possible terms  from ‘Holy spirit’ to ‘Bholenath’ to ‘Love, Peace, Joy and Hope’. Amidst all of these sprouted‘nothingness’ from one participant.  With these words they quickly put up a song that had a chorus and a verse. Each group came up and performed to the others. Once the song was set, we got into a drum circle with djembes. No right, No wrong beats started as the group played the djembe and tried to sing their composition as they played along.

What followed as a debrief was interesting . The word that stayed with the group was ‘nothingness’. It was interesting to see what students understood of nothingness. Answers rolled down slowly from “Nothingness is everything” to, “I don’t know what it means ” followed by, “It means nothing to me in connection with Spirituality” to ” Nothingness is letting go”, ” Nothingness means nothing exists at all”. This also stirred a discussion in the group on how difficult it is to hold our thoughts lightly. Each one held his / her idea of nothingness so strongly that by the end Nothingness actually became ‘everything’ for this session. Some felt peace, some in thoughts and some puzzled. 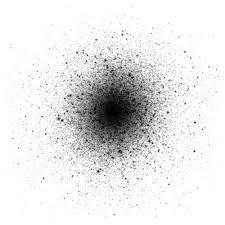 Nothingness, also called emptiness (sunyata),does not mean that things do not exist at all. It means that things lack an inherent, independent, self-existence. While being nothing in this sense, they are something in the sense that they do have a conventional existence in dependence upon various other causes and conditions. the causes and conditions upon which something depends lack inherent existence as well. So, there is not even a form to grasp on to that is distinct from emptiness. And even the notion of emptiness, insofar as it is a definite conception, lacks inherent existence. Thus, in the end, the distinction between somethingness and nothingness collapses, and the mind opens.
The reverberations of the beats ended as the minds rumbled .