The Right Approach: Right to Education – Part one

This week’s blog reflects the importance of primary education, right to education and its incorporation as a fundamental right in the Constitution of India and how inclusive education for children with special needs is the ultimate goal of envisaging this legislation

The education system of any society paves the way for development and progress of that society. It helps to evolve and progress all capacities in a person resulting in the inculcation of a quality allowing the person to control his environment and accomplish his possibilities (John Dewey, 1976). The primary education of an individual focuses on building the base for a mammoth structure which is going to be erected on that base. It affects the way of life, the quality of life, the social status of the individual and most importantly helps in taking an informed and rational decision. Primary education helps in shaping the career path, an aptitude in general and skill set in the specific field of interest. The general aptitude and specific skill set created by the virtue of primary education play an important role in pursuing higher education which shapes the entire career path. It encompasses reason in individuals and helps them to create a better society to live in. It makes them aware of their rights and duties which further acts as an agent of reformation whenever and wherever required in the society.

The models of disability such as moral or charity, medical, social and human rights evolved with changing socio-political scenario in India. In India, it’s a majority belief that disability is a curse, social stigma and an undesired problem needed to be cured or set right (Karmakar and Saxena, 2015). The social model laid emphasis on disability as resultant of accessibility and rights model perceive it as human rights. The charity approach or medical approach did not lay emphasis on access to rights of persons with disabilities which changed after acknowledging the rights based approach. Historically, the children with special needs were marginalised from the general education system and were forced to pursue their education in ‘special schools’. It has been observed that even if children with special needs were enrolled in general schools, the dropout curve is steep before reaching the secondary stage (GCE, equal right, equal opportunity report, 2014). The factors such as physical abuse, bullying and inaccessibility hinder the enjoyment of the right to education (UNESCO, school violence and bullying: Global Status Report, 2016).  Apart from these factors, unsuitable learning materials, discrimination and prejudice towards children with special needs, exclusion from mainstream schools and inferior quality of education create a glass ceiling for children with special needs. 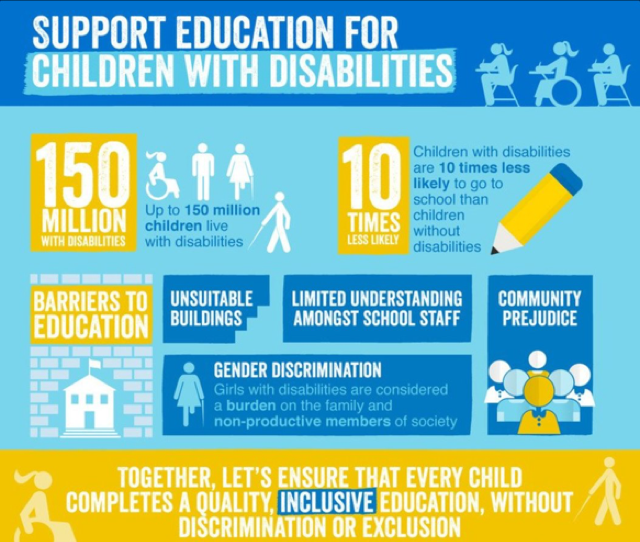 However, education as a matter of right was long due in Indian rights regime but a constitutional amendment in the year 2002 inserted Article 21A in the Constitution of India to provide free and compulsory education of all children in the age group of six to fourteen years as a Fundamental Right. The right to education ensures that every child has a right to full-time elementary education of satisfactory and equitable quality in a formal school which satisfies certain essential norms and standards (RTE Act, 2009). This is an inclusive act and does not distinguish between regular children and children with special needs. It mandates the schools to create an accessible inclusive learning environment which would be efficient in imparting education to regular children and children with special needs together.

In the next blog, we will focus on the status of RTE Act, 2009 and whether it has helped in creating an inclusive learning environment in the Indian school education system.