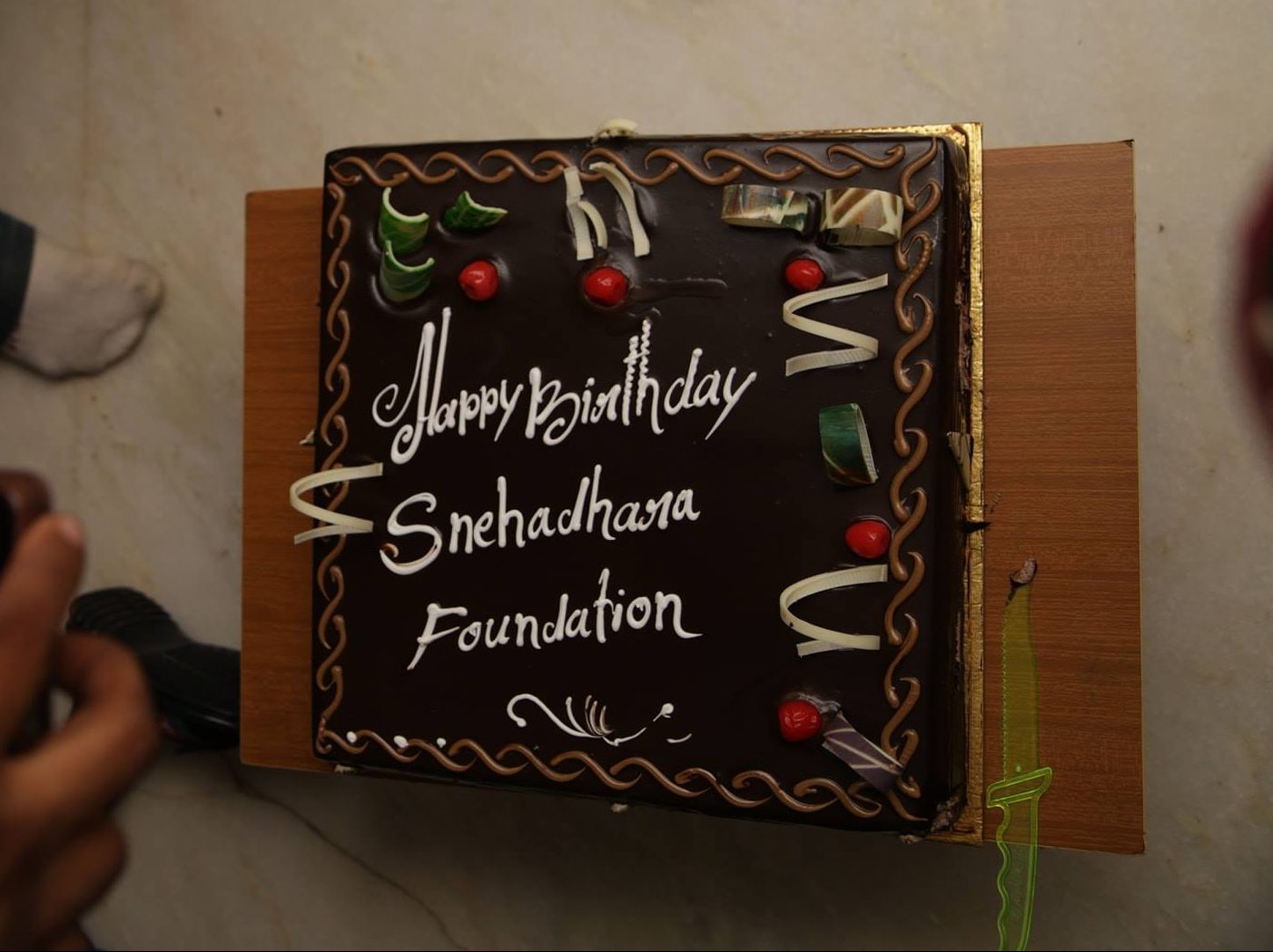 Snehadhara’s sixth Birthday celebrated on December 5th at the Direct Care Centre in JP Nagar, was a grand event that brought many smiles and much cheering from facilitators, children, staff and parents. From months before, plants were grown, pots painted, menu plans tossed about, action lists made up and divided. In the weeks leading up to the birthday, hectic preparations and meticulous planning were on in full swing. Onions or potatoes? Sprouts or sev? Saris or Salwar kurtas? Thogri kaalu or Avare kaalu?

Once it emerged that there would be four different spaces of sharing on the day of celebration, facilitators and staff were assigned to each of those spaces. And yet, in the usual Snehadhara spirit, everyone was invested with all the spaces. The Theatre-makers prepared ideas that would be sprung upon visitors with an invitation to script a play then and there and perform it, using the available props and costumes. Songs were sourced by the Music makers and the room decorated with images of musicians – for inspiration. The gardening team showered attention on the seed patches and even enlisted the neighbours’ support for sapling care, during the Diwali holidays. The Inhouse performance team received registrations from across the Snehadhara family, including Board members (some of who, we are told, took time off from their daily schedules to practise for the performance.)

When the day of celebration dawned, many long hours had already been clocked; saris, flowers, and charts put up; onions chopped; thogri kaalu peeled and cleaned; songs rehearsed and wigs procured. The room wasn’t darkened for the performance. There was no stage – just a performance space. The decorations were all reusable or compostable.  In the Music Room – Unplugged, the ambience drew in the parents and children – what with the portraits of singers, the circular seating arrangements and the fairy lights. Parents and kids performed solo and group songs – a mix of Bollywood and regional songs. There were some startling and beautiful solos by the children, who also added their twists and touches with shlokas and their own special numbers. While the famous musicians were identified by some of the children, some parents performed together impromptu.

“I always believe that co-creating holds immense potential in bringing out the best and new ideas”, says Vithika, of working with the Unplugged (Music) team. “Everybody is different but the support and respect for each other’s thoughts, the high energy levels made not only Unplugged successful, but also the entire birthday celebration.”

The day of celebration opened up new ways of viewing the children for many facilitators. The impulse control shown by many was remarked upon. Parents were also surprised at the many new facets they saw of their children. For the facilitators, the celebration was an opportunity also to experience the parents’ creativity. Bunty says, “It was wonderful to see parents volunteering to sing and some of our kids singing songs of their choice. Personally, I was thankful to the internet and the advancement of the technology that we could have lyrics of any song. It was wonderful to see one parent saying she can sing a particular song that was the favourite of another parent. At the end both of them sang along.”

Kavita was missing her family and also “very very nervous” when she started performing her solo dance. She couldn’t even make eye contact with the audience, she shares, but when her eyes fell on a child smiling, something immediately eased out. “It was a very special moment for me,” and then the dance took care of itself.

Rukmini enjoyed the “spirit of togetherness and how everyone worked without differences”. She shared that the birthday celebration was an affirmation of the encouragement that the facilitators and staff receive for all projects. Utthara learnt many things in this very special birthday celebration, she says. It was a celebration of expression, she says. “The feelings inside everyone were expressed. It was beautiful. I am grateful to all who have been part of my experiences  here and I wish that Snehadhara grows from strength to strength.”

Many staff members and facilitators wished that more parents had come. Alamelu expresses disappointment that not many people came to the terrace to see the fruits of the work they had put in over all the weeks. “Also I wish we were not all separated from the rest of the groups.”

“Seven weeks of planning, planting and preparation went into our gardening space,” says Arun, wishing that more parents and invitees had come up. The staff members had prepared sharings on the process they had gone through together to make the space as verdant and beautiful as it was. “Overall it was a very rewarding process,” says Arun for whom the highlight of the day was the way a very shy child opened up to the Clown and started communicating with him with ease and joy, before she left.

The improvised and devised performances in the theatre space brought much delight to the children, parents and facilitators with many surprise acts being pulled out of the air, as it were. Children “played” with parents of their classmates and parents teamed up with other parents to make up stories and enact them.

Kala Manch – the Inhouse talent feast put up by the all of the staff and facilitators of Snehadhara was a definitive hit with all. The performances flowed seamlessly and were Houseful indeed, even as other spaces were simultaneously filled with other creative endeavours. Kala Manch ran to two shows – one for the guests and one exclusively for the Snehadhara team.

Even as the shows were running in many spaces, the tangy, spicy unique snacks on offer at Shaale Thindi were lapped up with curiosity and delight. From thogri masala to the sweet potato, green chutney delight to the steamed nenthira pazham, the snacks were a hit. Their lightness belied the work that had gone into planning the shopping, peeling, boiling, chopping, grinding behind the scenes. The children were involved in many of the preparatory activities and saw what their work had resulted in, on the day of celebration.

It was this journey – from preparing to enjoying to sharing to cleaning to rearranging – that was most enjoyed by all. And the journey continues as photos are looked at and laughter and hoots of joy fill the room. The art of weaving art into the daily routine seems to have settled deeply into the Snehadhara way of doing things. This was certainly clear from this year’s birthday celebrations.