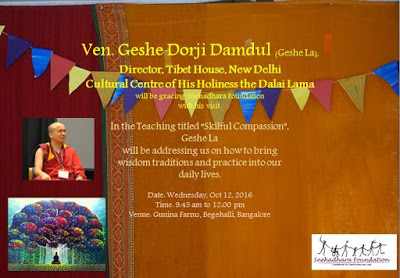 In the Teaching titled “Skilful Compassion”, Geshe La will be addressing us on how to bring wisdom traditions and practice into our daily lives.

About Geshe Dorji Damdul:
In 1988, Geshe Dorji Damdul joined the Institute of Buddhist Dialectics, Dharamsala for formal studies in Buddhist logic, philosophy and epistemology. After 15 years of study in Buddhist philosophy he finished his Geshe Lharampa Degree (Ph.D.) in 2002 from Drepung Loseling Monastic University. He joined Gyudmed Tantric College for a year for Tantric studies.
In 2003, the Office of H.H. the Dalai Lama sent him to Cambridge University, England for Proficiency English studies. He was a visiting fellow at Girton College, Cambridge University.
He is appointed as the official translator to H.H. the Dalai Lama since 2005. He has been serving as the interpreter for H.H. the Dalai Lama for so many years and at the same time involved in doing written translations of many texts from Tibetan into English such as Arya Nagarjuna’s “Mulamadyamikakarika” (Fundamental Wisdom of the Middle Way), Acharya Shantideva’s “Bodhicaryavatara” (Wisdom Chapter.
While assigned with the same task of translating for H.H. the Dalai Lama inside and abroad India, he was appointed as the Director of Tibet House, Cultural Center of H.H. the Dalai Lama, New Delhi in March 2011.
As assigned by the Office of H.H. the Dalai Lama, he visited the US in 2008 to work with Prof. Paul Ekman on H.H. the Dalai Lama’s book “Emotional Awareness” which is co-authored by Dr. Paul Ekman of the University of California Medical School.
His Holiness the Dalai Lama also assigned him with a text book project. He is one of the chief editors for the text book on Buddhist Science and Philosophy. This text book is to be used for Centers and Institutes all over the world to study more thoroughly on Buddhist philosophy, metaphysics, epistemology, and science.
You can also visit his Blog:
http://bodhiwisdom.blogspot.in
The teaching is organised by Snehadhara Foundation on 12 Oct 2016 at Gunina Farms, Begihalli, Bangalore.